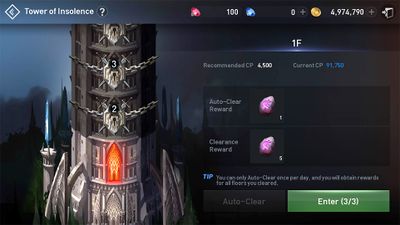 The Tower of Insolence is a structure that was built by Emperor Baium under direction of Beleth in Lineage 2 Revolution.

The demise of the Elmoreden Empire ushered in an age of darkness. The different territories each declared their independence from the Empire, leading to bloody skirmishes in the conquest to claim sovereignty over the lands. Of these, one struck fear in the hearts of all. They were the powerful Dark Society, led by Beleth, the user of black magic.

The Dark Society believed that true authority stemmed from the terror that power instills in the weaker, and they began to conspire in secret to bring chaos to the world. They were the ones who convinced the proud Emperor Baium of Elmoreden to build his Tower of Insolence.

Before malice and dark energy could permeate the land, Hardin, a powerful sorcerer second only to Beleth, stood in the way of the Dark Society. Hardin had been keeping an eye on the Dark Society's activities, and he was able to successfully stop their plan from coming into fruition. Over time, however, his efforts alone were inadequate to staving off the Dark Society's advances, and he decided to gather allies who could help him.

In the prime of the Elmoreden Empire, Baium aimed to match the gods in grandeur and began building a tower that would reach the heavens. Einhasad, the goddess of creation, learnt of his intentions. She cursed Baium and crushed the tower. Now, instead of living an eternal life, Baium is trapped atop the tower in eternal torment. However, the Tower of Insolence is still attractive to adventurers wanting to prove their strength.

Travel to the Tower of Insolence if you want to challenge yourself. There, you can test your strength and be rewarded accordingly with Exp., equipment, Rune Fragments, and more. You can also use the daily auto-clear to acquire additional Rune Fragments.