In addition to the four castles that are seats of power in Aden, there are several fortresses across the land. Controlling a fortress allows a clan to reap economic rewards, as well as take advantage of a buff when hunting in the area surrounding the fortress.

In a fortress siege, up to 11 members each from two clans will clash for control. The first clan to destroy their opponent’s base will take control of the fortress until the next siege.

The siege supports up to 50vs50 real-time PVP combatants.

After starting at one end of the siege area, players are tasked with imprinting on a Holy Artifact and fending off the enemy assault. Once a player Imprints on that Artifact, they are crowned King. There are two turrets on the field that will damage players - because there is no way to negate this damage, teams need a tank in order to absorb the damage and allow players to move relatively freely. There is also a Fountain that heals players at the center of the map, and flanking these, two Buffs that give you special buffs to stats for your entire team.

In order to get to the target, players must destroy several gates and Altars while protecting their own Altars. Once the main Tower falls for either team, the team who destroyed the tower is declared the victor. 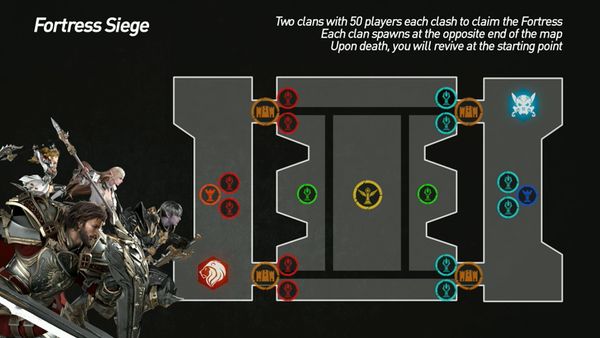